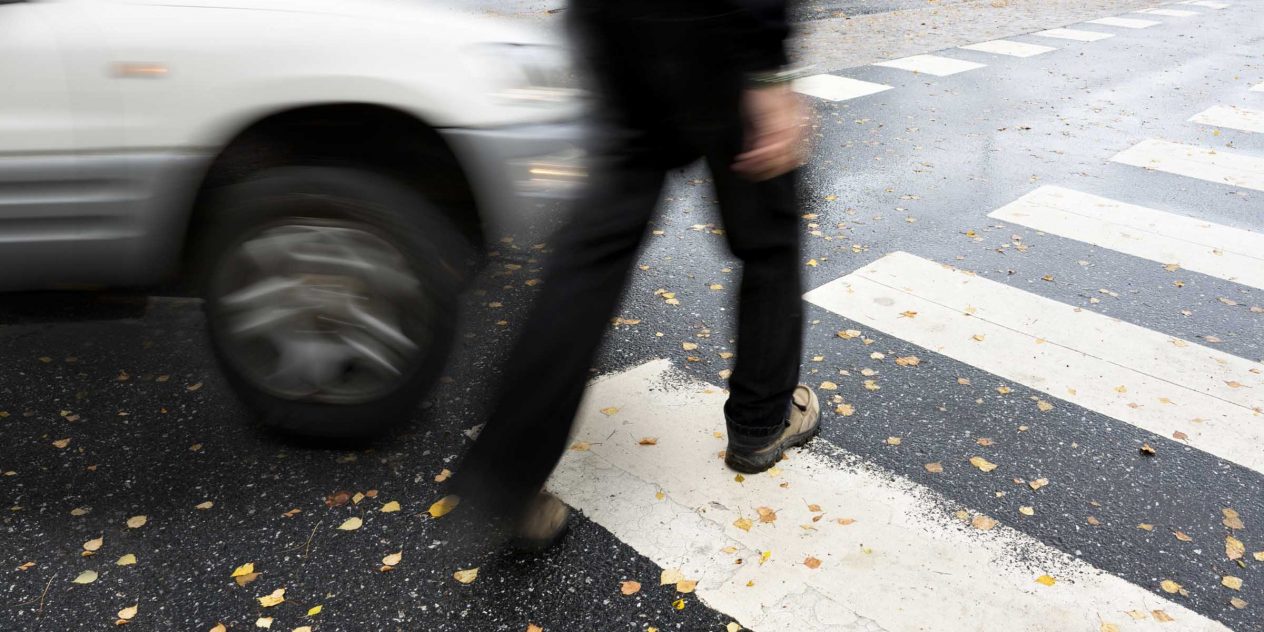 During the dark winter months it is important that drivers be extra vigilant when it comes to watching out for pedestrians and cyclists.  Poor visibility and wet roads can make it harder to see what’s in your path, and any amount of excessive speed makes drivers less able to stop suddenly if they have to.  But what responsibility does the pedestrian have to keep from being struck by a motor vehicle?

Pedestrians have the same obligations as motorists to follow the rules of the road, but they must also take some responsibility for their own visibility and be careful to monitor any distractions that may prevent them from making good decisions when crossing roads.

Following is a recent case summary that demonstrates the importance of pedestrian responsibility when it comes to safety on our streets:

In the recent case from the BC Court of Appeal (Vandendorpel v. Evoy ) the Plaintiff was struck while crossing a street on an early October morning.  He was at a light controlled intersection; he pressed the button to activate the pedestrian walk signal, but did not wait for the signal to come on.  The Plaintiff decided to proceed to cross the street while the walk signal still displayed a hand, indicating do not walk.  The Defendant was driving slightly over the speed limit, and entered the intersection on a fresh yellow light, striking the pedestrian.

With respect to the relative fault of the driver and the pedestrian, the trial judge wrote:

[53]      While both parties failed in their respective duties of care, I find Mr. Evoy’s failure was much less significant than Mr. Vandendorpel’s. His negligence consisted of driving at a speed that was over the posted limit, even if it was only minimally above that limit (i.e., approximately 55 km/hr in a 50 km/hr zone) and doing so when the lighting and road conditions were less than optimal. Compared to this conduct, Mr. Vandendorpel’s failures were more serious. He was dressed in dark clothing, including a dark hooded pullover that was zipped up to the top. None of his clothing had any light reflective qualities. Counsel for Mr. Vandendorpel submits that wearing dark clothing is not in and of itself contributory negligence. That submission is correct, but Mr. Vandendorpel’s failures are greater than simply the clothing he was wearing. He was also wearing headphones and listening to music and that reduced his ability to hear any on-coming traffic. He also had to cross a five-lane roadway that spanned approximately 18 metres. Although he depressed the pedestrian control device, he only waited a second or so before he attempted to cross the roadway. He carelessly did so even though the pedestrian control signal was still red and the traffic control signals were still green. Mr. Evoy’s vehicle approached the Intersection from the north. That is the direction Mr. Vandendorpel was initially walking. The headlights of Mr. Evoy’s vehicle would have been visible from at least 100 metres away. Mr. Vandendorpel must not have looked north on Sooke Road as he began to cross the roadway because he did not see the headlights of Mr. Evoy’s vehicle until it was approximately 30 metres away from him. That is, until the vehicle was just about to enter the Intersection. At that point, the pedestrian control signal was still red and the traffic control signal was yellow. Notwithstanding all of this, Mr. Vandendorpel chose to run across the path of the on-coming car instead of standing fast or retreating.

[54]      I remain of the firm opinion that Mr. Vandendorpel showed a reckless disregard for his duties as a pedestrian on the roadway and conclude that his degree of fault for the accident is greater than that of Mr. Evoy.

[22]         The issue for this Court on appeal is to ask whether, given the facts, the apportionment of liability is “grossly disproportionate” to a result this Court would have reached: Moses v. Kim, 2009 BCCA 82 at para. 33. Having assessed the facts and the relative blameworthiness of the parties, I cannot find that the judge’s apportionment satisfies this threshold. The trial judge referred to the analysis for apportioning liability under Cempel and MacDonald; he was aware of the factors that ought to be considered when apportioning liability and he engaged in the appropriate analysis.

This case highlights the caution pedestrians need to use to take care of their own safety.  During the dark winter months, it is especially important to take steps to ensure you are visible to drivers due to the poor weather and road conditions.  A few simple actions to take are:

An apportionment of liability between parties affects the portion of compensation the injured party receives.  For example, if you are found 50% at fault and your total losses are $50,000, then you would be entitled to half.

It is important to consult with a lawyer after an accident if you are injured and ICBC has made a determination of fault against you.  The way ICBC determines fault for insurance coverage purposes may not be the same as how a court will decide on the issue of liability.

If you have been involved in an accident as a pedestrian, we encourage you to contact one of our lawyers for a FREE CONSULTATION.  Suffering from both physical and psychological injuries as a result of an accident can have a significant impact on your work, personal, and recreational life.  Our team is here to ensure you are properly compensated and receive the treatments you are entitled to.