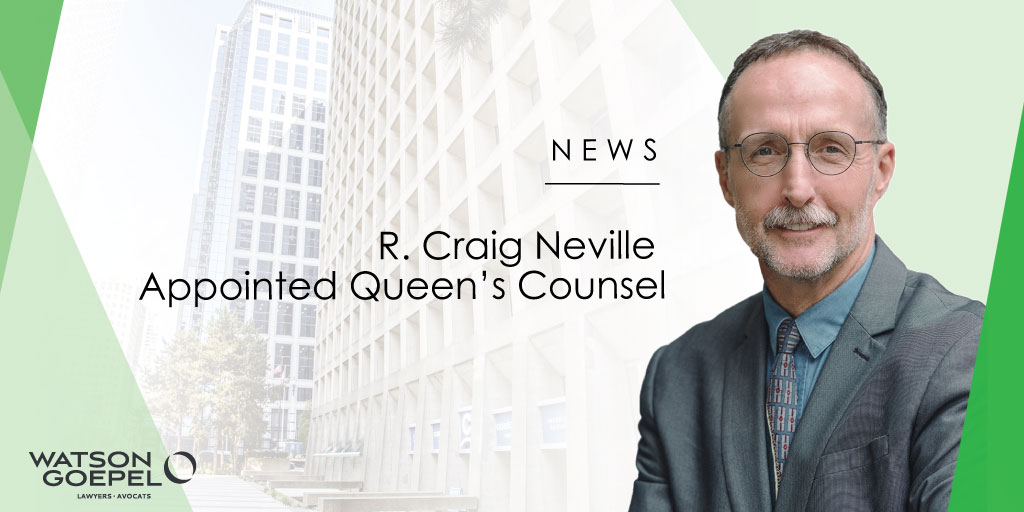 We are pleased to announce that Watson Goepel Family Law lawyer, R. Craig Neville, is a 2021 recipient of the honorary title of Queen’s Counsel (QC). This designation is given to a handful of lawyers each year for their contributions to B.C.’s provincial justice system through their work as a lawyer, their good character, professional integrity and continuing dedication to their communities. Craig has been a leading practitioner and valued colleague in the family bar since 1986. His early dedication to the betterment of B.C. communities through volunteerism at every level, both personal and professional, helped shape his future as a lawyer. Craig has been both a mentor and a role model for lawyers looking to the future of family practice and is widely recognized in B.C. as a certified Family Law Mediator and Parenting Coordinator having been instrumental in setting up Parenting Coordination in the province. He has been recognized in Best Lawyers ® in Canada since 2012 in the area of Family Law and Martindale-Hubbell® since 2002. He is the recipient of the Salvation Army Volunteer Lawyer of the Year Award, 2011; Gold and Silver Jubilee Medals from Her Majesty the Queen for Volunteer Service; the Cecil Walker Award, Big Brothers of Greater Vancouver and the Chairman’s Commendation, Big Brothers of Greater Vancouver.

The announcement of the 2021 appointees was made on December 2 by Attorney General, David Eby. The honorary title of Queen’s Counsel is granted annually on lawyers to recognize exceptional merit and contributions. The advisory committee for Queen’s Counsel appointments includes several senior members of the BC judiciary and legal community.

To read the Ministry of Justice’s official announcement regarding the 2021 QC recipients, please click here.