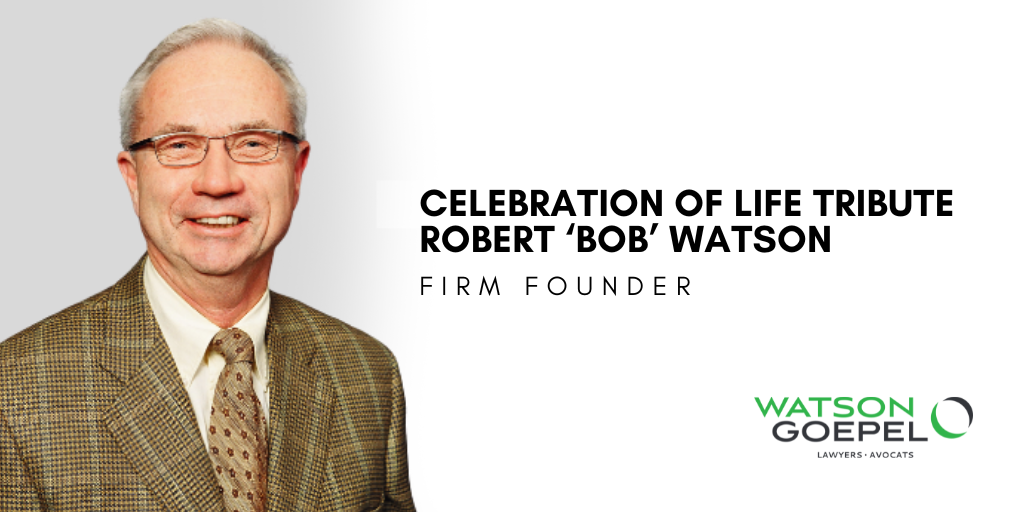 By Celso A. A. Boscariol, QC on behalf of Watson Goepel LLP

Let me begin by expressing heartfelt condolences to Karen and Bob’s family from the Watson Goepel Family, our partners, associates, students and staff, many of whom are here today. Bob meant a lot to us at Watson Goepel and will be greatly missed by us all.

I am here on behalf of Watson Goepel to talk about my dear friend, mentor and partner, Bob Watson and what he meant to Watson Goepel LLP, the law firm he founded in 1984 with the now Hon. Mr. Justice Rick Goepel who back then was simply Rick. Diane Reilly, the firm’s first employee also joins us today to pay tribute to Bob. I’ve just celebrated my 30th work anniversary with Watson Goepel LLP. Without Bob I wouldn’t have done that.

Bob was the firm’s initial managing partner, a position he held until 2006. He was pivotal in the firm’s growth, building and maintaining a successful corporate commercial practice alongside the busy trial practices of his partners. Bob’s meticulous eye to detail and financial acumen assured Watson Goepel’s immediate success. As managing partner Bob was frequently called upon to make the “hard decisions” invariably putting the firm’s interests ahead of his own. Bob led by example. He gave more than he asked of his partners.

Without diminishing the contributions and talents of Bob’s partners, Bob was the glue that held the place together while the rest were in court cross-examining witnesses, making arguments and all the other exciting and interesting stuff trial lawyers do. As the old saying goes, managing a law firm is akin to herding cats, and independent and strong-willed ones at that. Bob was a good shepherd. He cared for and tended his herd with great devotion.

Watson Goepel’s culture and work ethic were established early on under Bob’s leadership. Bob’s “can do” attitude and willingness to explore new opportunities offered by prospective clients and circumstances saw Watson Goepel grow steadily into one of BC’s most reputable and well-regarded law firms and entry into “the sought after go to guys” club when you had a problem or a business to buy.

Bob mentored many young associates in both the art of lawyering and the equally important management of their practices assuring their success.  His patience in bringing along young lawyers and staff to meet his high standards was embodied in Watson Goepel’s pledge to “Exceed Client Expectations”. As a beneficiary of his patience and frequent recipient of Bob’s motivational icy stare, I and many others who had the privilege of working with and learning from Bob can attest to that.

Bob’s counsel and strategic vision was cherished by his clients, frequently being called upon to serve on their boards. Bob was more than a top-notch lawyer. He was a confidant and counselor to many business owners and entrepreneurs. Bob was a frequent recipient of those calls that started “Bob what do you think about….” that turned into sound advice contributing greatly to the client’s success or in other instances, averting catastrophe. There are a lot of people around town still thanking Bob for his wise counsel.

In his retirement Bob continued to provide his sage counsel to his golf companions referring them to Watson Goepel to finish the job he started. Even in his retirement, Bob always had Watson Goepel’s well-being at heart, in much the same way a father looks out for his children’s well-being even into their adulthood. It’s fitting that as we celebrated Father’s Day this past Sunday, Bob truly embodied that spirit, both as a father and as one of Watson Goepel’s founding fathers.